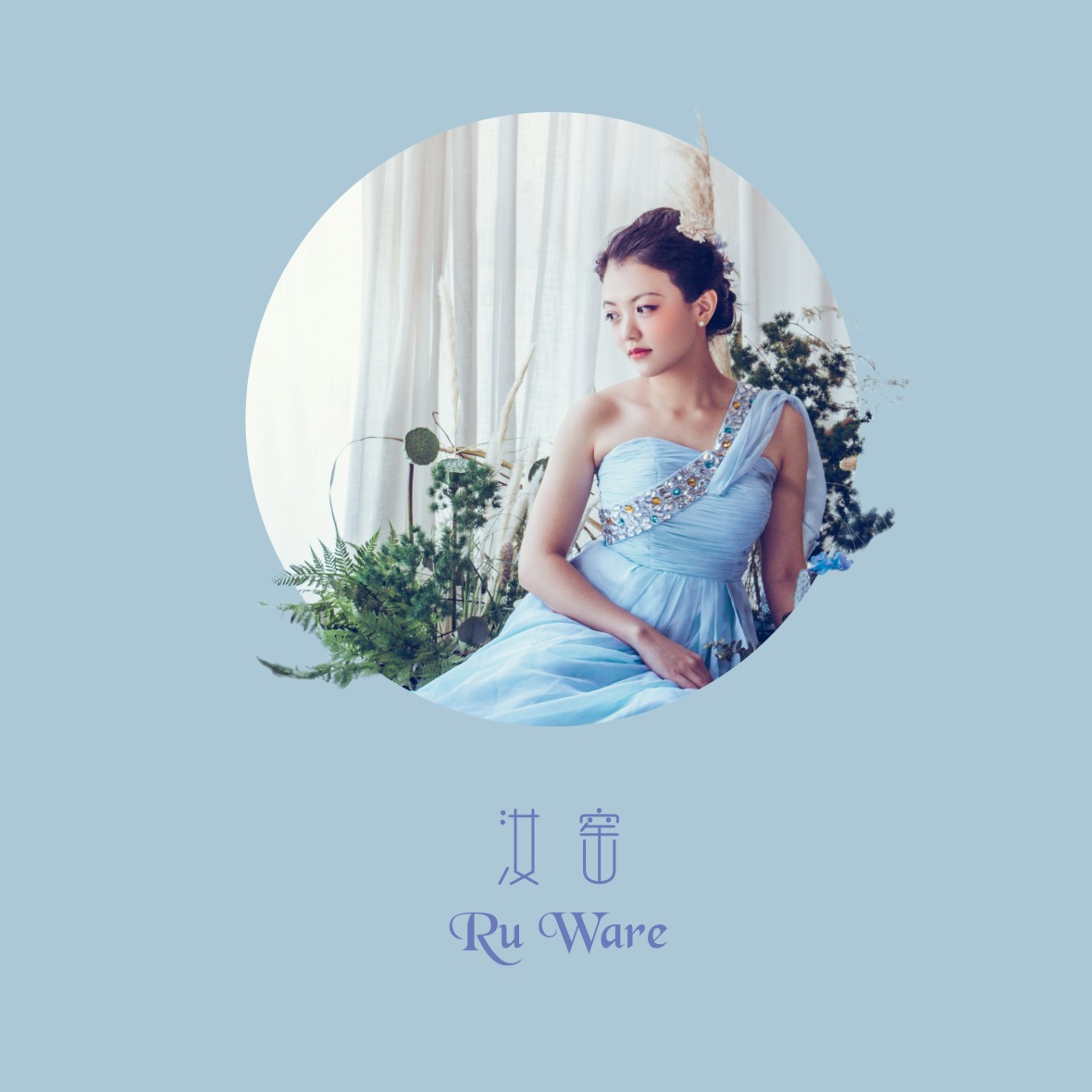 If you’re a Jay Chou fan, you’ve GOT to know this colour–Greyish blue sky colour 天青色 which was part of the lyrics written by his lyrics Fang Wen Shan in his famous song 青花瓷. This is a colour-term that is imperially unique and reserved for the Ru ware of Song dynasty.

The Ru ware, for all its understated simplicity, is seen as the king of Chinese porcelain. There’s even a Chinese saying that regardless of how wealthy a person is, it pales in comparison to just a fragment of the Ru ware.

Although the song title referred to the blue-and-white porcelain which most of us are more familiar with, based on the lyricist’s reflection article, we know that he was actually really referring to the Ru ware of Song dynasty. After all, the lyrics did mention the Song calligraphy writing! 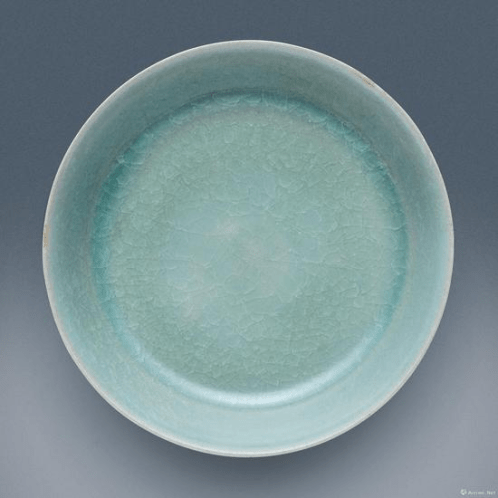 The Ru ware is most famously known for its record-breaking high auction prices, having fetched almost 0.3 billion HKD in 2017’s auction by Sotheby’s HK. And, Sotheby’s has a really nice video dedicated to the Ru ware.

You must’ve find it extremely underwhelming to have anyone paying so incredibly much for something you probably can find in Daiso. I know what you’re thinking.

Except that you can never find it in Daiso. Even with today’s technology, artisans are struggling to replicate it to no avail.

There’s something that pictures cannot capture, I was told, about these Ru wares that there’s a faint purplish glow to its greyish-blue-green glaze that is matte-ish.

Also, apparently they are all extremely dainty in size, with most of the items ranging between 10-16cm, and very few above 20cm, almost none that’s more than 30cm. Thus the saying–nothing big ever comes out of Ru ware 汝窑无大器 (oh the irony).

So from a mercantile pov, it’s an extremely high price per cubic cm price. That’s why one can never look at works of art or antiques through a monetary lens. 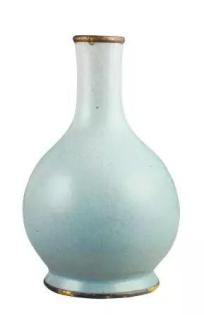 Today’s replicas are generally too glossy and are made of coloured pigments so the colour isn’t a result of the chemical reaction that the glaze underwent when heated unlike the original. It was said that the ancient craftsmen mixed agate (a semiprecious stone) powder amongst others in the glaze to produce this look.

So let me tell you why people, even in 2017, fought for good 20 minutes at the auction, over 30 bids, to arrive at such an astronomical amount for a simple, understated, minimally decorated plate. 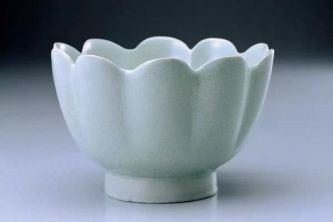 Unattainability
There are only about 100 pieces known to exist in this entire world, with only about 10 in private collection and the rest under the collection of various museums (strictly prohibited from auctioning and reselling). So there’s almost no circulation of such in the private market.

Rarity
These pieces were only produced as imperial ware for a very short period of 20 years (this is extremely short compared to others that have been around for centuries) and dynasties. It has a jade-like quality, but some researchers believed that its production ceased partly because they ran out of the right material to produce this exact glaze. Another reason was because of foreign invasion during that period, the production ceased and after relocation, they weren’t able to reproduce them anymore perhaps due to access to raw material or other limitations.

The skills and knowledge of creating such glaze are lost. Even in subsequent eras and dynasties, artisans were unable to recreate the glaze to its original glory, let alone current day artisans who have been long-removed from that past.

In case you suspect that the high price of Ru ware might be from its lack of crackling lines–The Ru wares also have really fine crackling lines, but it differs quite a bit from the harsh lines of Ge and Guan wares. The Ru ware’s lines were really fine and there is a lot of variations between the weight of the lines (thickness and thinness vary greatly). 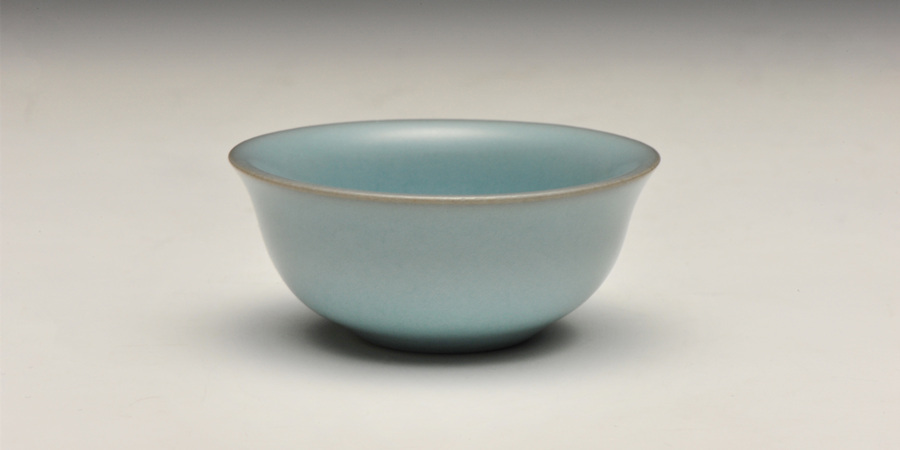 Definitely a dainty glaze for the dainty ware. 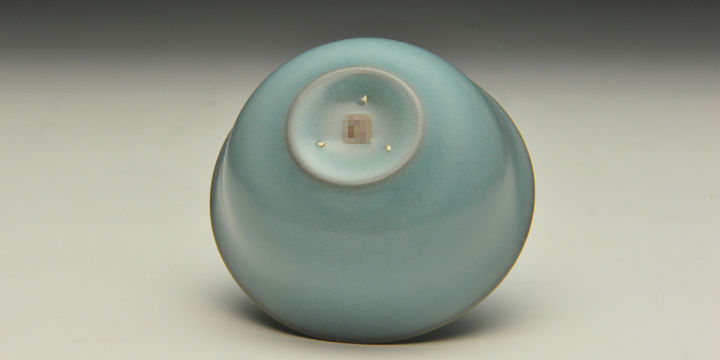 Ru for the Romantics

Besides the extremely elegant and minimalist design, the Ru ware is also associated with romantic ideals of the Song dynasty, and in particular that of, the Song emperor Song Huizong.

“Albert Camus wrote a novel, The Stranger, in which his character, Meursault, is condemned to death. Three days before his execution, he was able for the first time in his life to touch the blue sky. He is in his cell, he is looking at the ceiling. He discovers a square of blue sky appearing through the skylight. Strangely enough, a man forty years of age is able to see the blue sky for the first time. Of course, he had looked at the stars and the blue sky more than once before, but this time it was for real. We might not know how to touch the blue sky in such a profound way. The moment of awareness Camus describes is mindfulness: Suddenly you are able to touch life.”–Thich Nhat Hanh 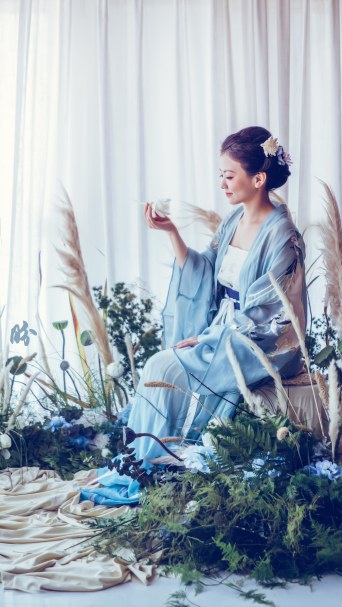 Very much like the character in Camus’ novel, Song Huizong was an emperor who wanted to be reminded of life in a mindful and deliberate manner. He was a firm believer of Taoism (almost to a bit of an extremist state actually), and there has been a long-established tradition amongst Chinese literati to aspire towards being one with nature through acts such as having bonsai and stone formations in their gardens. The discovery of Ru ware, too, was in line with that romantic aspiration.

As usual, there are several versions of stories on the founding of Ru ware. My favourite and the most romantic one was that in the deepest of the imperial palace over 900 years ago, Emperor Song Huizong had a dream. In it, he dreamt of a beautifully calming scene where the rain had just stopped, and the clouds were started to part. He found the part of the sky where the clouds were parting particularly charming and ordered for his men to make a glaze according to that colour in his dream.

After multiple trial-and-error, they finally succeeded in creating it around 1090 CE.

The blue and white porcelain that we are most familiar with was very much used for foreign export or commoners in its ancient past (thus the universal familiarity with it), whereas the Ru glaze was very much something owned by only the Chinese imperial family.

Knowledge of such glaze is a symbol of your cultural capital or social status–so now you’re all qualified to parade around pretending to be of the literati class! I’m sure mentioning this would earn you quite some respect from the more learned Chinese!

I’ve read that there is a Taiwanese artisan who managed to almost replicate the colour and lustre of the Ru ware, using agate and gold powder as ingredients. Judging from the images, I would say that it really seems like quite a close match with quite a reasonable price tag of about 1800 SGD for a cup (it’s relative!)!

I am aware how this set of dresses look very Japanese, but it’s actually Tang dynasty style of dressing toned down to blend with the Song aesthetics. And that’s why this looks very Japanese–because a large part of the Japanese aesthetic and arts is very much inspired by the Tang and Song period of China.

The Ru ware and its calming qualities (haha I’m making this sound like crystals or some new age thing) remind ancient literati and emperors alike the importance of nature, simplicity, and authenticity. It’s ok to appear plain and simple if you have greater depth to your existence, and your value will be appreciated in time like a beacon of clear light shining through the messy opulence.

A highly versatile tea with a sweet alluring profile, Dancong is perhaps best known for its ability to evoke myriad aromas and flavours like tropical fruits and flowers — think peach, apricot, jasmine, orange blossom, citrus, and so on. Like a soft, gentle, shy, and sweet summer kiss, Dancong is at once intoxicating and invigorating, veiled ever so thinly in an aura of exoticness and mystery.

One Reply to “Beyond Red: The Chinese Palette–The Calm After Storm Blue 汝窑”